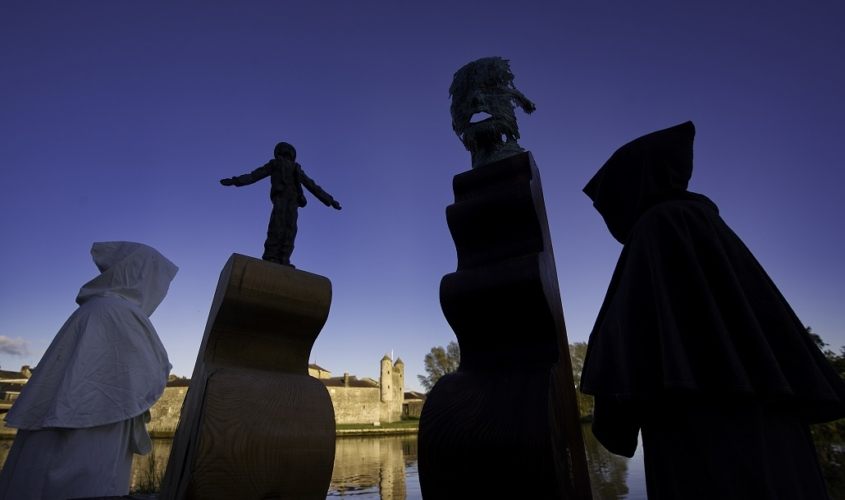 The Beckett Enniskillen Chess Set, a permanent public art installation by sculptor Alan Milligan comprising 32 1.5ft tall bronze chess pieces representing characters and motifs from the work of Samuel Beckett, and 64 1ftsq steel cubes as chess squares in bronze mounted on wood is the next phase of a Literary Tourism Project that is already reaping benefits for Enniskillen.

The pieces will be mounted in 64 different indoor locations across Enniskillen within the four ‘corners’ of Enniskillen Royal Grammar School (Portora site), Forthill Cole’s Monument, Enniskillen Castles Museum and National Trust Castle Coole, forming a chess set that will be played throughout the year with performances at three key times.

The installation is the second phase of an Enniskillen Literary Tourism project, the first of which, The Flight of the Little Golden Swallow, saw the installation of 150 little swallows in gold leaf across Enniskillen Island Town during early summer, on the exterior facades of retail stores and community buildings including its schools.  Installed in May this year, already that element of the project is meeting the objective of helping to revitalise the town and its surrounds post-lockdown.

Sean Doran Artistic Director of Arts Over Borders, the organisation delivering the project explained: “The Flight of the Little Golden Swallow over the past few months has been wholly welcomed by Enniskillen’s traders and wider community and has fired the imagination of many who understand exactly what the project aims to achieve and how it can be maximised to the town’s advantage.

“Literary Tourism is an emerging niche sector within the wider cultural tourism sector, where places with literary heritage offer author and fiction-related literary tourism opportunities, along with opportunities arising from literary festivals, trails and book shops.  Following the installation of the Swallows, Enniskillen BID (Business Improvement District) has commissioned a mural of Wilde’s the Happy Prince, the Council has agreed to gild Cole’s statue which it is believed inspired Wilde’s story and traders are considering incorporating Wilde into their offering from jewelry design to menu items. All of these things help to build the tourism offering in the area.”

Now the second phase of the project builds on another of the town’s adopted sons, Samuel Beckett.  Beckett famously attended Portora Royal School in the 1920s.  With chess as one of the central themes in the writer’s work, Doran first commissioned sculptor Alan Milligan in 2013 to produce the Beckett Enniskillen Chess Set for the Beckett Festival held in Enniskillen and its surrounds. With this latest project the pieces will be brought out of storage and will become a living artwork with a game of chess performed each year.

“With all of the chess pieces installed it is our intention to play out a game of chess each year,” said Sean Doran. “We will work with chess masters to establish a game online with the pieces in Enniskillen being moved across our living chess board on the ground in Enniskillen in sync with the moves made by the masters online.

“This set up means that at three key times throughout the year, the public can follow the game online and in performance beginning with the Queen’s Gambit Opening Game on Good Friday (Beckett was born of Good Friday of course), the Middle Game will be played during the annual Beckett Festival which is set to return in 2022 and the End Game will be played out over 1-3 days from the 22nd December, the date of Beckett’s death.”

As he goes on to explain, Doran has curated the location for each square very deliberately, with a particular meaning behind each place chosen.

“Each location chosen for the chess board and the placement of the chess pieces is of significance,” Sean said. “For instance, the Queens (Winnie and Not I) are at The Regal/Fermanagh Unionist Association and in Maguire’s Keep Enniskillen Castle (the oldest room in Enniskillen) while the Kings are in Magee’s Spirit Store (Krapp) and Rebecca’s Cafe The Buttermarket (Hamm). The Knights starting points are in the Sinn Fein office, Blakes of the Hollow, Enniskillen Hotel, Portora School Dining Hall and the Bishops are in St.Macartin’s Cathedral (Gogo from Godot), St. MIchael’s Church (Didi from Godot), Saddlers Restaurant (Pozzo from Godot) and Aisling Centre.

Bernie Mooney, Project Manager said, “significantly, this project is part of a wider European Initiative, the NPA funded SPOT-LIT programme, supporting economic development through the vehicle of literary tourism and Enniskillen will benefit greatly from the additional visibility and growth this will bring to the area.”

A key issue that the project will address is seasonality for Enniskillen and Fermanagh. Those behind the literary tourism project see the Flight of the little golden Swallow which is installed on external walls as particularly appealing in spring and summer while the board and the pieces of the Beckett Enniskillen Chess Set will be located internally and therefore fitting for autumn and winter viewing.  Added to this is the performances that will take place at key points throughout the year.

Sally Rees, Project Support, who has worked with local businesses and organisations on the installation of both The Flight of The Little Golden Swallow and the Beckett Enniskillen Chess set, says,” essentially these two contrasting installations are strategically complementary lending themselves to different seasons. Both provide the opportunity for tourist trails that will take visitors across and around the town to places of interest and into community buildings, public buildings, shops, cafes and places of worship and ultimately have a very wide appeal.  Added to this of course, is the live performances of the chess game at key points throughout the year.”