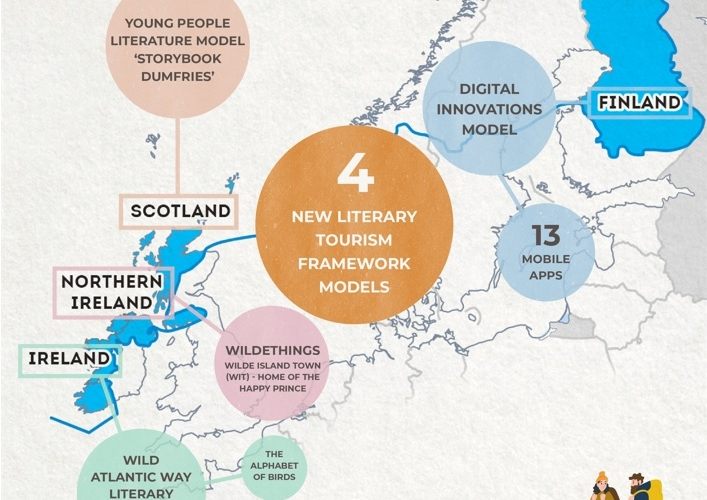 Through the Spot-lit.eu project, four Literary Tourism Models have been developed to grow products and markets in the sector. The regional models (pilots) have now been delivered, demonstrating a high level of innovation and originality.

WILDETHINGS Literary Model: Arts Over Borders celebrate the Wilde and Beckett connection to Enniskillen, Northern Ireland with the launch of two new literary products. Oscar Wilde, with the installation of 150 gold-leaf swallows on buildings around central Enniskillen and close to the new mural of The Happy Prince by Jordan Shaw, and Beckett, with 64 black and white chess board squares in separate indoor locations across Enniskillen. Find Out More HERE.

The Wild Atlantic Way Literary Performance Model: The Western Development Commission in the west of Ireland have developed two Literary Performance Models, that focus on enhancing the existing tourism product The Wild Atlantic Way through literature, space and performance. The models have been developed and piloted, a collaboration between curator/producer Dani Gill with sound designers, visual artists and theatre makers has resulted in the creation of  The Lighthouse Project, a series of  walks inland in the vicinity of lighthouses.

Independent Literary Producer Brendan McEvilly has collaborated with local authors to develop a live stage show that contains visuals filmed  around the west of Ireland by filmmaker Jamie Goldrick. Audiences have literature presented in a format including curated live performances in tandem with pre-recorded elements. Find Out More The Lighthouse Project and The Alphabet of Birds HERE.

Young Peoples Literary Model: Wigtown Festival Company in South West Scotland, who run the annual Wigtown Book Festival, continue to develop their child-and family-centred literature model. Story Book Dumfries to establish the main town of Dumfries & Galloway as Scotland’s home of children’s literature, a destination for families to visit and a national cultural resource. The Wigtown team has taken inspiration from the recent establishment of Scotland’s new National Centre for Children’s Literature at Moat Brae House, where Peter Pan author JM Barrie played as a child. But Story Book Dumfries is not tied to any one organisation. It offers a platform for a wide range of partners who believe in the power of children’s literature to inspire and bring tangible benefits (economic, cultural, social and educational) to the Dumfries community and beyond. Find Out More HERE.

Digital Innovation Model: The Kainuu region of Finland has led the way with the development of  13 Digital Applications to showcase the rich literary assets across the four partner regions. The Regional Council of Kainuu have worked closely with the local university, Kajaani Univercity of Applied Sciences to pioneer the use of digital technology to help literary tourism business tell their story at home and abroad and promote Literary Tourism. Find Out More HERE.

The four regional delivery outcomes together form a complementary, but united set of Literary Tourism test models devised and documented for future transferability, which reflect and capitalise on each region’s unique own sense of place and literary strengths.

Tertulia – A Bookshop like no other, Westport, County Mayo.