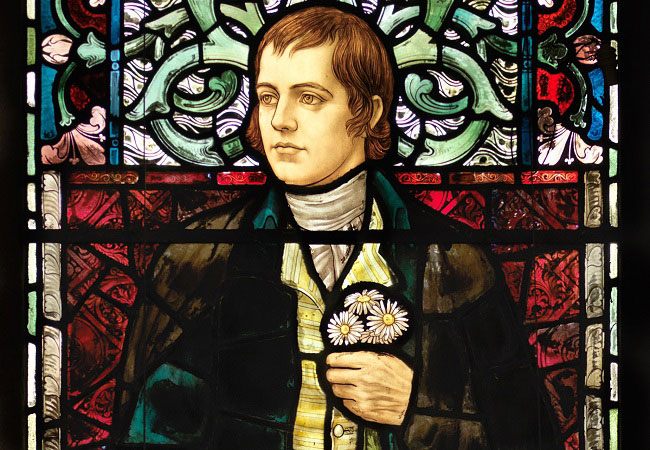 The stained glass portrait of Robert Burns found in the Bute Hall.

University of Glasgow Research Finds Robert Burns Is Worth £203 Million Annually In Direct Value To Scotland, And Amonst £140 Million In Brand Value.

Scotland’s national bard is worth just over £200 million a year to the Scottish economy and the poet’s brand is worth nearly £140 million annually, a report by the University of Glasgow has revealed.

The year long study funded by the Scottish Government and led by the University’s Professor Murray Pittock assessed how much the worldwide fascination with Robert Burns is supporting Scottish business and jobs.

It found that Burns economic and cultural importance to the Scottish economy is now estimated to be £203 million annually and the bard’s brand is worth £139.5 million a year.

While there have been studies of the economic impact of cultural Burns industries before – by economist Lesley Campbell (2003) and Moffat Centre (2005) who both valued Burns impact to Scotland at £157 million – this is believed to be the first assessment carried out on this scale.

In the last 20 years, there has been a substantial series of changes have taken place in Scotland recognising the poet’s importance including the opening of the £23 million Robert Burns Birthplace Museum in 2009 which has helped transform the visitor experience.

Within the UK, culture and heritage tourism in Scotland attracts more visitors than anywhere outside London. Robert Burns Birthplace Museum in Alloway is second only to Shakespeare among UK writers’ museums in its visitor numbers

The new University of Glasgow research proposes ways in which that Scotland could make even more of its national bard, in economic and cultural terms.

Professor Pittock of the Centre for Robert Burns Studies at the University’s College of Arts said: “More than 250 years after his birth, Robert Burns, his life and work, still holds a huge fascination for a worldwide audience.

“Burns has universal appeal with his work being translated into every single major language including Russian, German, French and Chinese. While Auld Lang Syne is our New Year anthem and has been performed by everyone from Elvis Presley to Jimi Hendrix.

“We are very fortunate to have such an iconic Scottish figure like Burns. We have been able to put a value of over £200 million on the tourism, products, festivals and estimate an additional embedded brand value of almost £140 million which Burns brings to Scotland. What it shows is that Burns the Brand makes a huge contribution to the economy of Scotland.

“We hope that our research will help to inform and encourage Scotland to continue to develop plans to promote Burns at home and abroad. It also shows the great potential of Burns’ brand to support regional inclusive growth from hotels and restaurants to food, drink and memorabilia.”

Economy Secretary Derek Mackay said: “I welcome this report and the work conducted by Professor Pittock to explore the contribution of Robert Burns to the Scottish economy.

“It goes without saying that the cultural and societal importance of Burns the brand is enormous. In fact, the report highlights that the values and identity of Robert Burns – the lover of nature, the innovator, and the humanitarian – resonate with the identity of modern Scotland.”

#RobertBurns is worth just over £200m a year to the Scottish economy and the poet’s brand is worth nearly £140m annually, a report by UofG's Prof @P14Murray reveals 🏴󠁧󠁢󠁳󠁣󠁴󠁿

The biggest single source of economic impact is Burns-related tourism – it brings in in just under £155 million, almost two-thirds of which (£121 million) goes to Ayrshire and Arran where the poet was born and lived most of his life.

Burns Night, the celebration which takes place on the anniversary of the poet’s birth on 25 January, has a turnover of £11 million in Scotland.

Burns Festivals throughout Scotland have an estimated value of £7 million to Scotland’s economy. While spending on Burns-related food and drink is estimated to be £20 million and University research and education on Burns is estimated to bring £500,000 a year.

The research was given £46,000 funding by the Economic Development Directorate of the Scottish Government following a debate in the Scottish Parliament on a motion put down by Joan McAlpine MSP on the economic potential of Robert Burns on 17 January 2018.

Born in 1759, Robert Burns’ poems and songs have been translated into every major language, and his influence has extended far beyond Scotland. Some 9.5 million people worldwide are estimated to attend Burns Suppers annually.

The Centre for Robert Burns Studies is currently working on a 15 year project funded by the Arts and Humanities Research Council called Editing Robert Burns for the 21st century. By 2024, it will have produced a new multi volume edition of his entire work published by Oxford University Press. It has attracted research and development income well in excess of £4 million since

Courtesy of University of Glasgow https://www.gla.ac.uk/news/headline_705300_en.html

Unlock the Potential of the Literary Tourism Sector
Scroll to top