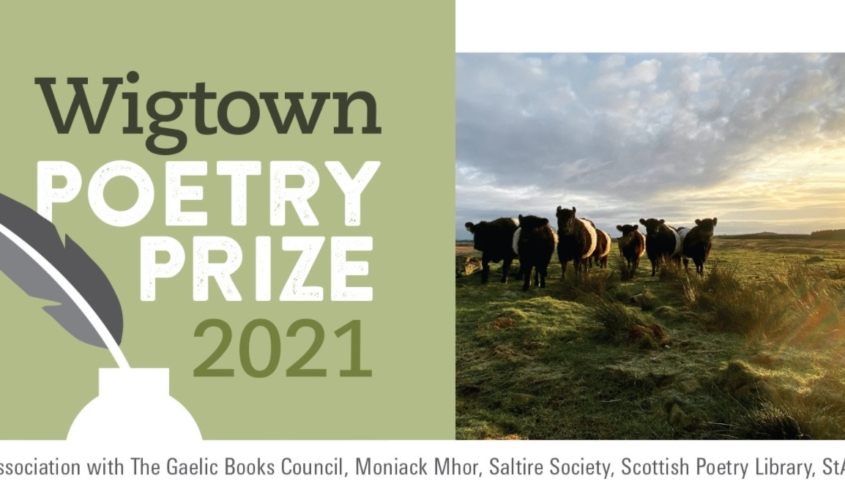 Founded in 2005, the Wigtown Poetry Prize is one of the UK’s best established writing competitions and a launchpad for many writers’ careers.
Refreshed and rebranded in 2019, Wigtown Poetry Prize welcomes entries from poets writing in English wherever they may live. Separate categories celebrate the best of Scottish Gaelic and Scots language poetry, a special category acknowledges a rising talent in Dumfries & Galloway, and a pamphlet prize is named in memory of Alastair Reid – local poet and one of Scotland’s foremost literary figures.
The competition closes on 31 May 2021, with a prize-giving at Wigtown Book Festival in the autumn. We hope to see you there.
In Association With:
The Gaelic Books Council.
Moniack Mhor Creative Writing Centre.
Saltire Society.
Scottish Poetry Library.
StAnza, Scotland’s International Poetry Festival.
Wigtown Prize: £1500.
Runner-up: £200.
Wigtown Scots Prize: £500.
Runner-up: £200
Supported by Saltire Society
Wigtown Scottish Gaelic Prize: £500.
Runner-up: £200.
Supported by The Gaelic Books Council.
Dumfries & Galloway Fresh Voice Award.
Professional support including mentoring by Wigtown Festival Company and a retreat at Moniack Mhor Creative Writing Centre.
Alastair Reid Pamphlet Prize.
30 copies of a pamphlet of your work set by Gerry Cambridge.
Invitation to Read at StAnza 2022.

A winner of one or more categories will be selected at the discretion of StAnza, Scotland’s International Poetry Festival and Wigtown Festival Company.

Those entering Wigtown Scottish Gaelic and Wigtown Scots categories can also submit their poems to be considered for the Wigtown Prize free-of-charge.